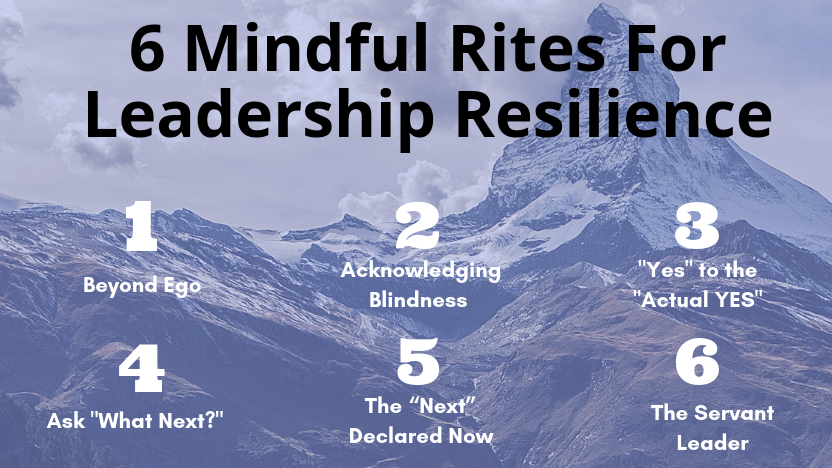 Following my article on the broad spectrum analysis of the new embodied leadership, I am kicking off this series with a take into the subject of leadership resilience. In a time of uncertainty from people to purpose, coupled with shifting worldviews and trends, the demand for leadership resilience is becoming increasingly significant. Leadership resilience can be referred to as the unwavering inner drive, focus, passion and the capacity to respond and remain objective in challenging situations.

The following 6 Mindful Rites reveal a basic context in which a leader may become conscious of what it means to be present, being in a space of unbroken resilience.

The term “rite” is used to highlight a convention of knowledge and embodiment. It is better attributed to the cultivation a leader upholds for him-/herself for resilience to be lived. These 6 Mindful Rites are derived from my personal reflections, experience, observations and are inspired by the 6 Rites of Mastery shared by the chairman and founder of Friends to Mankind NGO, Dhyan Vimal.

A key facet about a leader's identity is built on his/her capacity to be useful. This usefulness can be viewed in this context as being adaptive to existing and accepted norms. Being useful in all situations gives him/her the traits of being somewhat adaptive to changing circumstances and being resilient. The rapidly shifting context often makes it difficult and sometimes impossible to adapt, resulting in a leader’s “useful”-identity being challenged. This can further lead to existential fears. Therefore it is extremely limiting to have a “useful”-identity ego as it compromises the resilience needed during times of rapid change. Becoming mindful of this is vital.

The first rite triggers a leader to acknowledge that if leadership resilience is a vital criteria for facing uncertainties, then not being effected by the limitation of the “useful”-identity ego is key.

For example, when facing a challenge that has an element of futility or unending struggle within it, a leader can be mindful that this might be effected by the limiting view of a "useful"-identity . A leader can allow him-/herself to recognise that this is not simply a problem to be solved but an opportunity to discover a new identity and reality to embody.

The crystallized identity or ego is also a declaration of “I know” in motion. The downside of an “all-knowing” leader is not being open to emerging knowledge and opportunities. The primary objective of this personalized “knowing” is to use reality to validate itself, inevitably hindering the capacity for objectivity. In being mindful of Rite 2, a leader can acknowledge this blindness in realizing that a reality based on “I know” may interpret demands that are not necessarily actual. Choosing to ignore this and reacting based on one’s “knowing” could lead to a great deal of effort and energy that can ultimately be unsustainable.

Rite 2 postures the leader to acknowledge his/her blindness. He/she is now more available to the objective reality. The resilience that emerges then holds a space for clarity and insight for an “unknowing” resolution to take shape.

According to Barbara Kellerman, a leadership lecturer at Harvard University, there is a lot a person can learn about being a good leader by being a good follower. Good followers, she says, are passionately committed and deeply involved. They actively support a good leader (one who is effective and ethical).

The above statement can also be read as the capacity for a good leader to allow him-/herself to be led and open to learn. This resonates well with the resilience needed for a leader to place objectivity ahead of subjectivity. The previous rite revealed the importance of acknowledging one’s blindness, as a space for objective clarity and direction to emerge. A direction born out of this clarity is highly congruent with the actual demand. I refer to this as the capacity to say “Yes” to the “Actual YES”. The growing interest in big data and technologies that generate unbiased information to drive decision-making is a good indication of the significance of this rite.

One may argue that many leaders are naturally saying “Yes” to existing demands, however, if the “Yes” is still governed by the “I know”, it is still a “Yes” only to one’s personalised reality. Instead, the silent yet resolute force of a “Yes” to the “Actual YES” is in being vulnerable. It is a resilience in becoming available to what is actual with the faith in the clarity of what is possible, emerging.

Being mindful of this rite drives the leader to simultaneously hold the “No” that is needed to prevent blindness from creeping back in. For example, if one says “Yes” to good health, the “No” to bad habits becomes one’s cultivation. Thus a leader who is clear and committed to his/her “Yes” and the corresponding “No” eases him-/herself to effortless transformation.

This rite is critical to keep the pull of the “comfort zone” at bay whilst the “Yes” and “No” is lived. It becomes evident when success and recognition are abundant and can cripple even the most experienced leaders. A leader who is mindful of this rite holds him-/herself to resiliently ask “what next?”. This rite is where leadership resilience is truly tested as it checks the integrity of Rite 1 which is not to be limited to the “useful”-identity ego.

The leader views him-/herself as a dynamic identity in transformation and acknowledges the purpose of their presence as a leader to embrace the opportunity to embody the “actual YES”.

Rite 5: The “Next” Declared Now

Rites 3 & 4 reflect the commitment a leader who lives to address the objective demands that he/she faces. Concurrently it also demands for the leader to declare who he/she is choosing to be. A powerful quote by Dhyan Vimal illustrates this rite succinctly: “It is a victory march, not a march towards victory.” . This is the emergent identity that the leader embodies by having the resilience to declare the “next” now.

The transformation-ready identity a leader becomes mindful of with this rite, is the essence of egoless leadership. Defeatism is neither an option nor a reality. The resulting culture from this resilience is one of commitment and ownership instead of fire-fighting and ego-serving rationale.

At times, the notion of service has often been reduced to an identity that profits at the cost of others or vice versa. This last rite literally cuts to the heart of leadership, which is embodying profit to all in the quest of serving excellence. It shines light to the human element of the leader which is to acknowledge the need to give and receive.

The need to be a gift for oneself and for all can be lived in dignity only when excellence is upheld. Serving excellence earns the right to receive generously, so one can continuously increase the capacity to serve more as oneself and to those receiving. With this rite emerges the most critical value known to humanity as love, to be lived as an inexhaustible resilience.

These 6 Mindful Rites for leadership resilience are an attempt to lay down the foundation to hold a leader to the mindfulness needed for and beyond him-/herself. It is also for what he/she chooses to be led by, those who choose to be led by him/her and lastly what emerges in this synergy for the bigger picture. A leader who adheres to these rites hold a decisive edge in relentlessly leading and performing from a resilience that defines him-/herself and his/her context for an ever-flourishing outcome now and into the future.

These 6 Mindful Rites play a pivotal role in my work with leaders and teams in initiating the blueprint of the performer. The subsequent articles in this series will dive deeper on each of these 6 Mindful Rites. Feel free to share and comment.

Navin Pillay has spent the last 25 years working in corporations around the world in diverse fields and cultures from aerospace engineering to project leadership, training and consultancy. He is highly skilled and knowledgeable in the domain of training and facilitation specifically with themes dealing with leadership, mindfulness, change/transformation and science of critical thinking. Navin is also TOCICO certified & a `Jonah` – Expert in Critical Thinking Processes and the Chief Corporate Facilitator for the Art of Performance by DV Institute for Higher Learning. He travels the world extensively conducting seminars and workshops and speaks regularly on topics related to individual/corporate transformation and breakthrough performance. He is the founding partner of Holia GmbH, a consultancy based in Berlin, specialising in customised holistic solutions for organisational transformation.